Which Apple Watch Is Right for You?

If you’re thinking about getting an Apple Watch for yourself or as a gift, a timely question is which model will best meet your needs. It’s not hard to decide—just follow along as we walk you through the choices. We’ll compare Apple’s three current models: the Series 1, the Series 3 GPS, and the Series 3 GPS+Cellular. (The Series 2 is no longer for sale but is essentially a slower Series 3 GPS.)

To begin, decide whether cellular connectivity is important. The most expensive model, the Series 3 GPS+Cellular, can connect to the cellular network. You can leave your iPhone at home and use the watch by itself to make and receive phone calls (using your iPhone’s phone number), send and receive text messages, create reminders, receive notifications, and even stream Apple Music. Honestly, it’s magical.

If you don’t need cellular or dislike the monthly expense, the decision is between the Series 1 and the Series 3 GPS. The most notable difference between these two is the GPS chip in the Series 3 GPS. It lets your watch determine your location, so even if you don’t carry your iPhone, you can record the distance of walking, running, and cycling workouts using Apple’s Workout app, and create a map of your workout route using popular non-Apple fitness apps like Strava. (The iPhone handles most other map-related tasks, so the Series 1 works just as well in those cases.) So if tracking workout distances, paces, and routes is important to you, go for the Series 3 GPS over the Series 1.

Even if you don’t care about GPS, you still might want a Series 3 GPS, because it has other advantages over the Series 1. For instance, the splash-resistant Series 1 withstands rain, but it shouldn’t go swimming. The Series 3 GPS is rated for immersion up to 50 meters, though Apple says you shouldn’t use it for “scuba diving, waterskiing, or other activities involving high-velocity water or submersion below shallow depth.” So, if you want to track swim workouts or don’t want to worry about water, you’ll appreciate the waterproofing in the Series 3 GPS.

Because the Series 3 came out later than the Series 1, it has more advanced hardware, including a faster processor, brighter screen, and an altimeter that tells you how far you went uphill during a workout.

The more sophisticated chipset in the Series 3 makes the watch more responsive when opening apps and interacting with Siri. Plus, Siri on the Series 3 can respond audibly instead of just textually.

As far as the screens go, they’re all the same size and resolution, but the Series 3 screen is over twice as bright, making it easier to see in sunlight.

Of course, these more advanced features come at a price, so the Series 3 GPS costs $329, compared to the $249 price of the Series 1. Are the brighter screen, faster performance, and better water resistance worth $80? If not, you might prefer to put the money toward a second snazzy watch band—Apple makes a wide variety of styles that you can swap out in seconds without tools.

You won’t go wrong with any of the Apple Watch models, whether you splurge on the Series 3 GPS+Cellular, avoid its monthly fee with the Series 3 GPS, or save money with the Series 1. Stop in at any Simply Mac store to try the test models and see which most appeals to you, or shop online at simplymac.com! 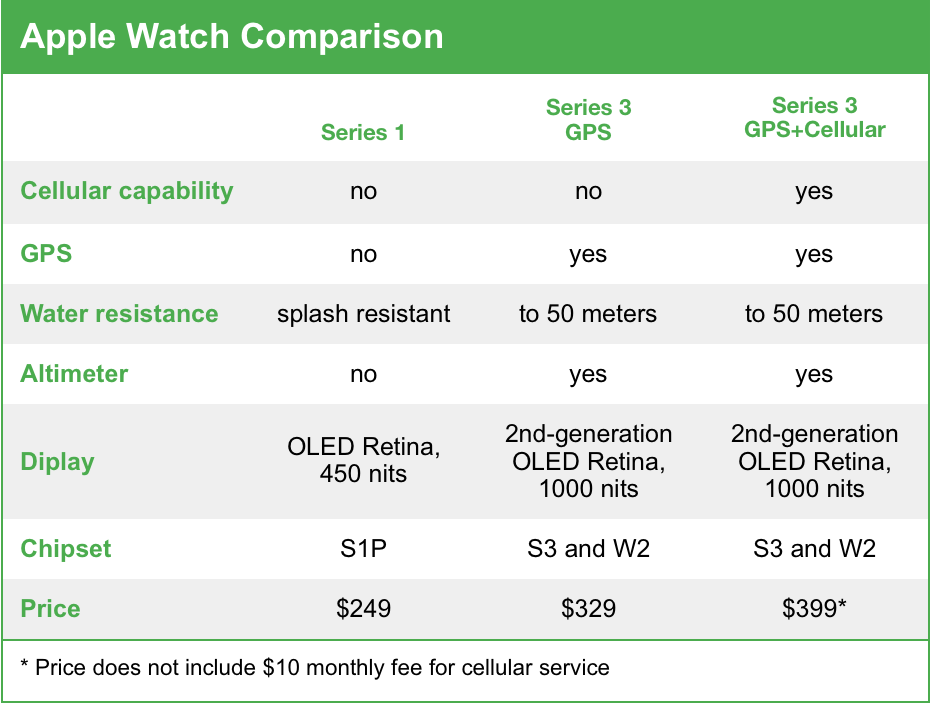