A trackpad is not a mouse. In some ways, that’s obvious—you swipe your fingers on it, rather than dragging it around on a desk. Less obvious, however, are the many trackpad gestures that make using your Mac faster and more fun. These gestures aren’t limited to laptop users, thanks to the Apple Magic Trackpad 2, which brings gesturing goodness to any modern Mac. You can even use it alongside your familiar mouse if you want! Here’s how to put your fingers to work.

Four Fingers on the Trackpad

The four-fingers-down gestures are dramatic and an easy way to appreciate the power of trackpad gestures, so we’ll start with them.

Say you have a lot of windows open, and you want to move them all aside quickly so you can open a folder or file underneath them on the Desktop. Place your thumb and at least three fingers together on your trackpad and then spread them outward. Your windows scurry to the edges of the screen so you can work with the previously obscured icons. To restore the windows to their previous positions, reverse the gesture, pinching your fingers in toward your palm as though you were making a fist.

If you haven’t moved windows aside, pinching your thumb and three fingers together instead opens Launchpad. Like the Home screen on an iPhone or iPad, Launchpad shows icons for installed apps. Tap an icon to open that app, or use the spreading four-fingered gesture to exit Launchpad.

Three Fingers on the Trackpad

Move three fingers horizontally on your Mac screen and either nothing will happen, or you’ll switch to a different “desktop space.” This curious state of affairs is most easily seen by making an app full-screen. For instance, open Safari and click the green full-screen button at the upper left of the window. Safari takes over the entire screen, including the menu bar (to put it back, hover the pointer at the top of the screen to see and click the green button again).

Now try swiping horizontally with three fingers. You should be able to move between two spaces: on the left is your Desktop and other running apps, and on the right, you’ll find Safari in its own space. As you make more apps full-screen, they’ll each take over their own space. (If you’ve ever opened Apple’s Dashboard, you may see it at the far left.)

What if you swipe vertically with three fingers? Swipe up to enter the All Windows view of Mission Control, which shows all open windows as thumbnails, along with desktop spaces in the top bar. Click any thumbnail to switch to it, or jump to any space by clicking it in the top bar. You can also click the plus button at the upper right to create a new space, or just drag any window into the top bar. To “delete” a space, hover over it on the top bar and click the X that appears. 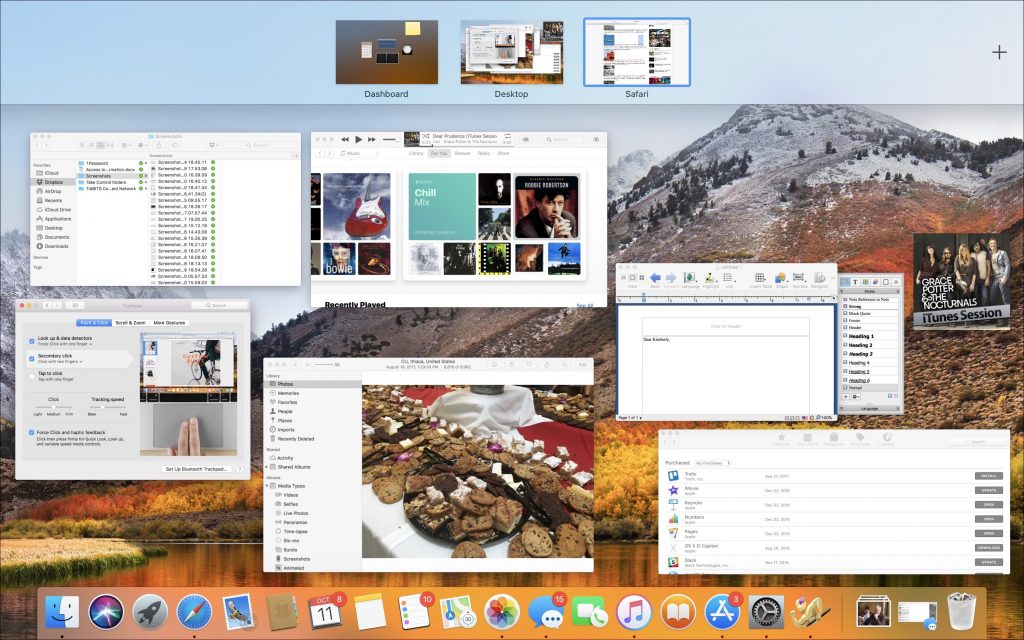 To exit All Windows view, swipe down with three fingers.

Two Fingers on the Trackpad

The two-fingered gestures are easier to get your head around than the three-fingered options:

Looking at Your Preferences

These gestures are extremely useful, but only if you use them! If you need a refresher, open System Preferences > Trackpad. Look in the Point & Click, Scroll & Zoom, and More Gestures panes to see a video for each gesture and adjust which ones are active and how many fingers they require. 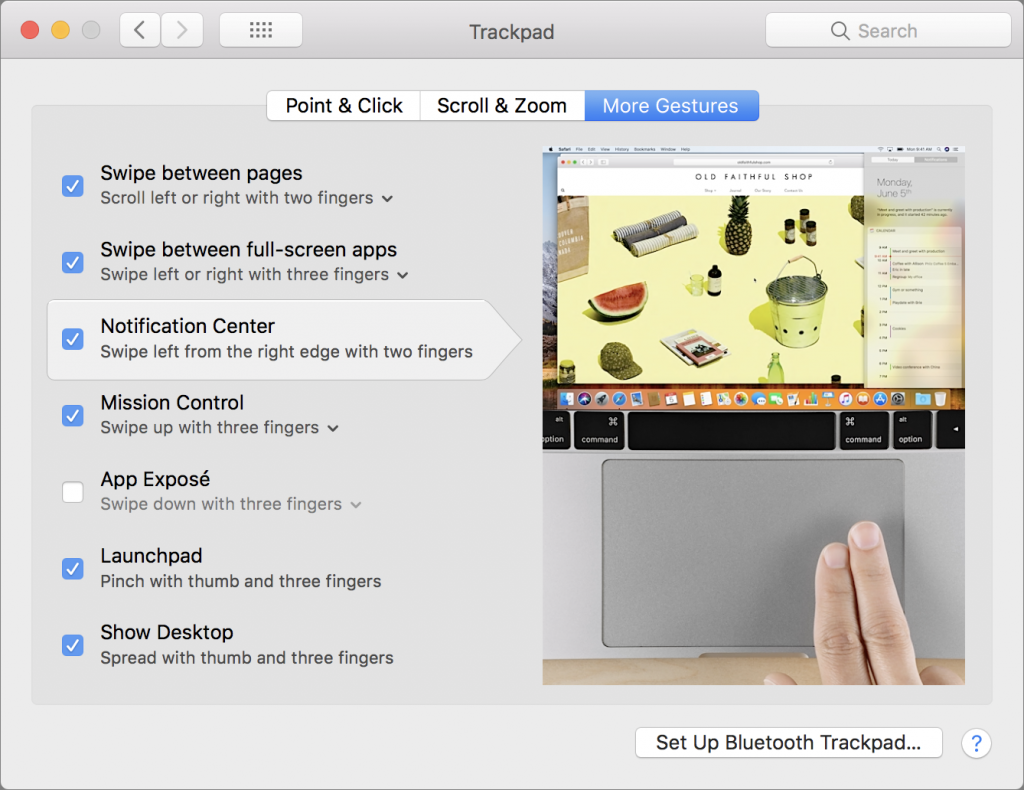 With so many gestures on offer, it’s worth your time to explore your trackpad’s special features.