Home automation has been around for years but has long been the domain of geeky hobbyists and the ultra-rich. Today, thanks to the influx of inexpensive and exciting “smart” devices, home automation is breaking into the mainstream. Apple users are in the sweet spot because Apple’s HomeKit technology provides a single, secure control center for all your devices.

HomeKit works behind the scenes to connect compatible smart devices to Apple’s Home app, which runs on an iPad, iPhone, or iPod touch. Once you set up a device in the Home app (where it’s called an “accessory”), you can control it directly from the Home app, in Control Center, or by talking to Siri. That’s right, you can turn on lights or lower the thermostat right from your iPhone! You can let family members control accessories from their iOS devices, and you’ll also be able to run everything via Siri on Apple’s new HomePod smart speaker, which the company promised for December 2017.

What if you want to unlock the front door for an out-of-town guest when you’re not home? For that you need a HomeKit hub. A HomeKit hub can run on a reasonably new iPad that doesn’t leave the house or a fourth-generation Apple TV—or the HomePod. A hub also enables “automations” that trigger your accessories in response to changes in time and location. For instance, an automation could turn off all the lights when you leave for work. 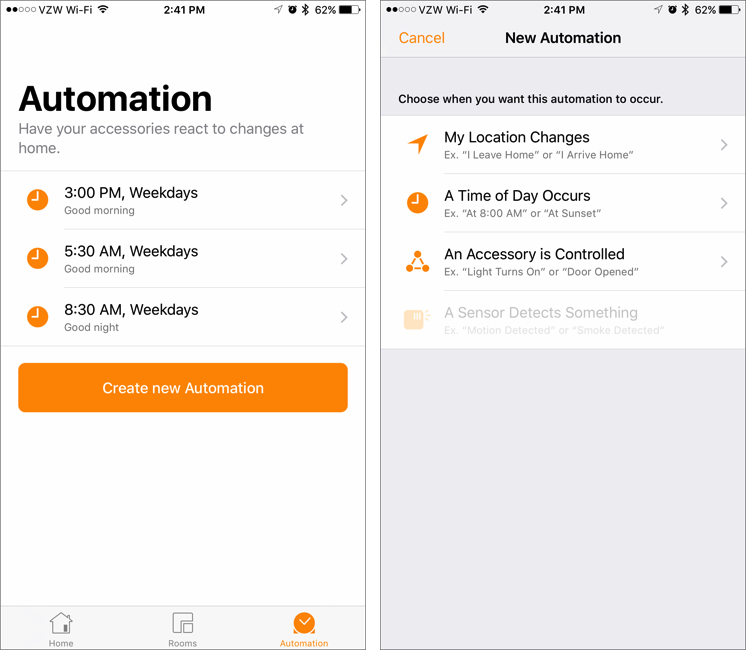 The smart light bulb is the best known HomeKit device. They’re easy to install—just screw one into a traditional socket. Some come in colors, making it possible to set up a funky party scene or to tell your toddler to stay in bed until the light turns green. Once installed, you can control them on your iPhone or via Siri (“Turn on the patio lights,” “Dim the bedroom light to 40 percent,” and so on). You can even control multiple lights at once, making it possible to switch all the lighting in a room to a mood—think romantic evening or hobby time—with a single command.

Perhaps more useful than a smart light bulb is the smart light switch. Install one in place of a traditional switch, and you can control its connected lights either from the switch itself or through any HomeKit method. It’s a lot cheaper than buying multiple smart bulbs.

Similarly, a smart outlet lets you control any standalone lamp or other appliance you can plug in. Some smart outlets also monitor and report on energy consumption.

Although they’re more involved to install, HomeKit thermostats are popular because they can save power while keeping your home more comfortable. Rather than relying on a simple set schedule, a HomeKit automation can turn down the heat when you head out in the morning and raise the temperature when you start your commute home. You can also control the thermostat from your iPhone at any time so you could, for instance, make sure the house is warm when you return from a winter trip.

HomeKit goes beyond control to monitoring too, by supporting sensors that provide status information and detect problems. Automations can use sensors as triggers, or the sensors can notify you so you can take action. An automation could use a motion sensor to turn on lights, for instance, or a temperature sensor could alert you to a dying freezer before your food thaws.

Other HomeKit-compatible devices include door locks, garage door openers, cameras, ceiling fans, and motorized window shades. Many smart devices work with HomeKit, but not all, so when you purchase one, make sure its product labeling includes a “Works with Apple HomeKit” badge.

One important piece of advice with home automation—take it slow, and make sure your entire family is on board. You don’t want to irritate your spouse or scare your kids with lights that turn on and off like the house is haunted.

To see Simply Mac’s selection of HomeKit devices, visit one of our stores. We’re happy to answer your questions about HomeKit compatibility and creating a home automation system.